“I could really feel aggression from those birds, they gave me a scene from Hitchcock’s Birds,” 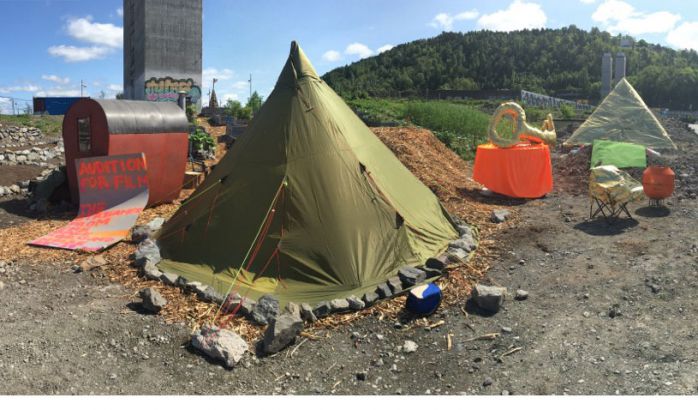 ... I said, and regretted that it was either too obvious or that they didn’t hear because of my occasional mumbling, which usually comes forth when I know that I’m saying something stupid, or that I don’t know … well, we were starting to walk from one place I like in Oslo to another place I don’t like in Oslo. From Lille Tøyen, through the Botanical Garden, Grønland, to the barren Annette Thommesens plass – written in the largest letters I’ve seen for any name of any place in the world, which is confusing, because I don’t know who she is – going over that neonlit bridge, switching: PURPLE / YELLOW / GREEN – at night, but now, as it was broad daylight, I think I threw or stole some flaming object from the most expensive restaurant in Oslo, Maaemo, on the beginning end of the bridge. Maybe it was my cigarette.

“I will never eat here,” I wanted to say, but couldn’t speak, because we had agreed that we would do this walk without spoken words.

We were walking extremely slow … I never walked that slowly for such a long time before. My t-shirt read “HUMAN SCARECROW”. We were walking towards Bjørvika, ending up by the grey blocks of Sørenga, but at a place I had never been before, namely The Flatbread Society, which lies bellow the brick Twin Towers of Oslo, by the Ekeberg tunnel. It’s actually nice there. 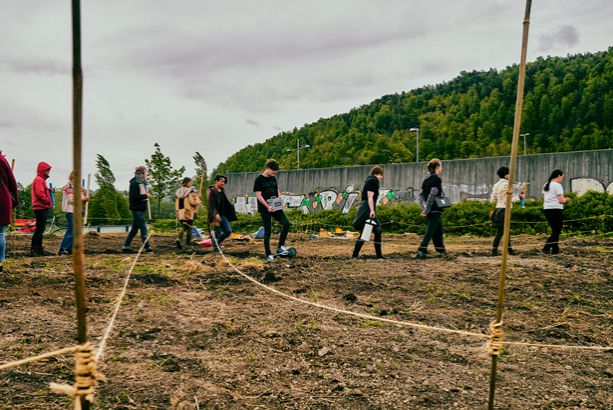 To eat and look at.

Quite idealistically it seems.

Hopefully it won’t be overrun by douchy shops, but that’s usually the case with every good thing in this city.

Anyway, we were walking very, very slow, and it changed my perception in many ways.

First experience: Boredom. I could really feel that, “goddamn, can’t I just do this faster … am I really doing this for several hours?”

Then: embarrassment. But not so much.

Then: giving the fuck.

I saw a lame boy practice parkour, something I usually would just glance by … but now I could really see that he sucked, and that he saw that I saw that he sucked, and his girlfriend, who was very beautiful in an Instagram way, also saw that I saw that he sucked … and this whole dynamic, just because I was walking slow, and looking … I really wanted him to realize that life could be so much more. The girl was filming. Over and over again. I was looking at her Instagram ass. Suddenly I realized that this existed, a designed parkour-playing-ground (parkour-court). That exists. Not them. So that something that represents freedom, moveability, creativity when practiced anywhere … could be contained in this silly installation. And it had contained them. It seemed as powerful as a perfect Instagram ass.

Coffee break on the bridge. No talking. Just sitting. Handing each other cups. Pouring. Drinking. Smoking. Looking. Relaxing. Always looking intensely at people. I did at least. Like I felt arrogant at times because of their lack of recognizing something as different. That something definitely was up. Can’t you see that something is up, and smile … maybe show some curiosity?

I saw a small dog rolled by a kid in a baby carriage, which made me laugh consecutively for three minutes … and with the kids speed I would have never seen that it was the face of a smiling bulldog, or just one feeling wind in his face and raising his cheeks for some reason I don’t know. It felt hysteric.

Then the cars. Some not understanding the concept. Having to wait for someone who obviously had all the time in the world walking over the white lines, till the green light turned red, and maybe not looking old or physically handicapped. Six, seven of them. What does it all mean? None of them honked.

Then we passed the new ugliness known as Sørenga, and came into our little cozy gardening society.

I had dragged a battery for the whole trip in a hand cart, which would give electricity for my amplifier in the concert we played two days after.

We walked into the Grain Field, which had the form of the navigational constellation Boötes, also known as the Shepherd. Each star was expressed as a circle, nine of them, on the field with Arcturus as the central navigational star, and the society’s core members; Oslo Apiary, Growlab, Food Studio, Hage Crew, Emmanuel Rang, Herbanists and Zoe Christensen; sowed seeds into their star-circle.

During the week a series of art performances took place at The Flatbread Society, curated by Hanan Benammar in Vandaler Forening. We were supposed to terrify the birds that would eat the newly planted seeds all around us 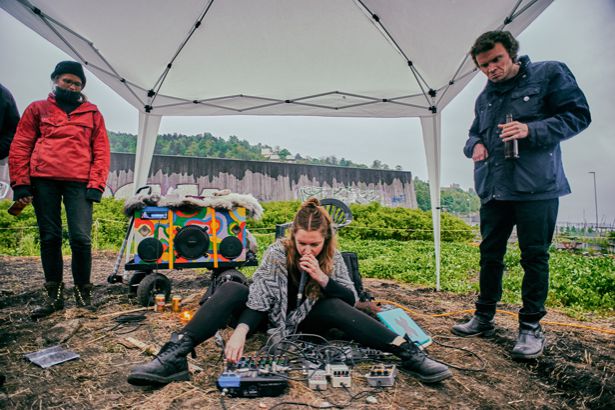 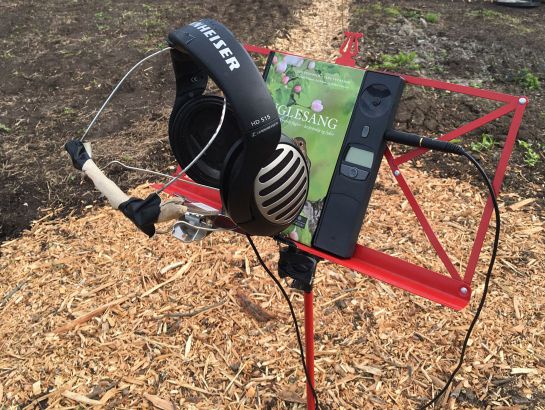 For our concert we played during heavy wind and rain, under a party tent, for two, three hours, until all audience had left us. We would play till complete exhaustion as long as we had an audience.

I used sounds from the games The Swamp Thing, Metroid II, Kid Icarus, Tetris, and some weird Japanese ones, and a Korg 10-synthesizer. Torunn sang and played digeridoo, used her Indian singing bowls, Torbjørn played his kinda broken gitar with different pedals, and Hanan her violin.

I felt in a very nice state playing this as loud as possible out to the highway, which unknowingly, was our biggest audience.

At one point Torunn and Hanan would just walk around the fields playing, a sight I very much enjoyed. That was very beautiful. 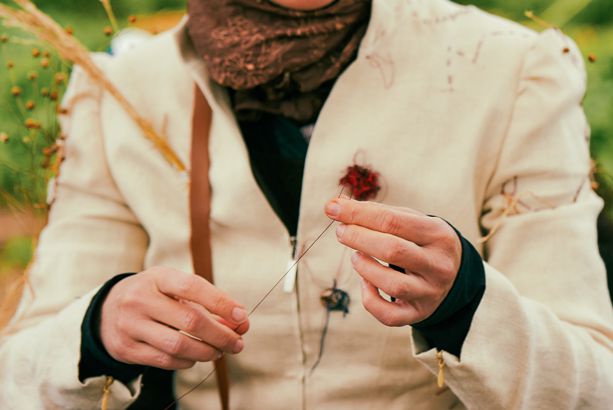 The day before Fernanda Franco would sit sewing different seeds on her jacket, and I could come ask her what kind of seed is that, and she said some bean seed I can’t remember the name of, “do you want it?” she asked, “you can plant it in your backyard, garden, some place, if you want,” and I said yes. She could talk for ever about the seeds she had collected.

Another artist, Paolo Gaiba Riva, was playing sounds he had recorded, and I sat for a while listening to birds and chilling out. 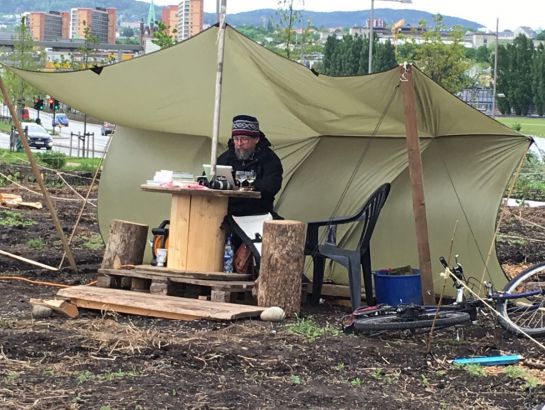 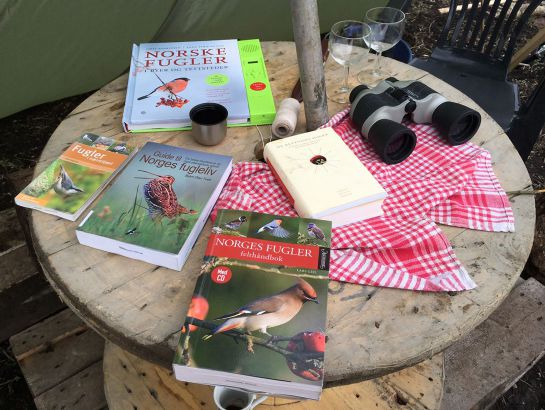 Coming late in the evening the 28th of May, a Saturday, Agnieszka Golaszewska had arranged a sound and video performance where she had invited other artists to participate. Her filming being projected on the wall of one of the towers, the musical performers playing from a terrace between the towers. Others scenes lit up and happening below in the field. A girl bluely lit up placing plastic cups all over her head. Another girl with quite sensuous lips smoking, wearing a mask that tripped out her eyes. 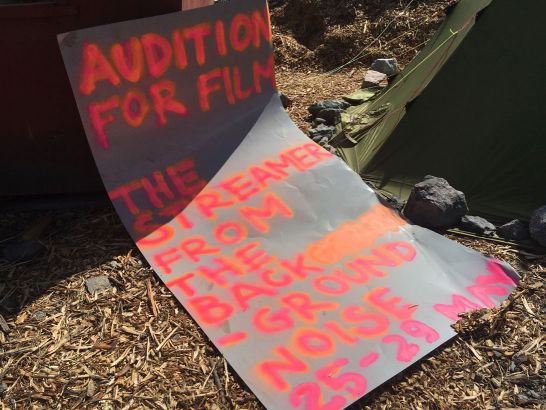 Jan Moszumanski, who was playing Death in June out over what suddenly felt like a desolate moor, the terrifying modern architecture creeping up all around us, the music acting out as some kind of radiation cleansing all poor architectural choices around the area. Slowly disturbing, filling out the music of Douglas Pearce, coming into his own musical expression when the power suddenly is lost, and he has to continue the concert banging barrels.

Then we just sit around smoking, drinking, listening to a boom blaster of diabolical beats I’ve never quite heard anything like, around a campfire, talking about the movie On the Silver Globe by Andrzej Żuławski, and everything seems in the right place to be.

Someone also said that the seeds had started to grow that very same day.

<<
Further On… to Land
>>
People, Seeds, Belonging Together
Stories Archive