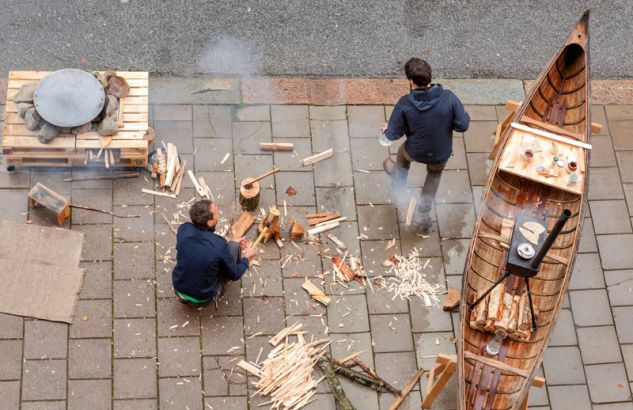 On Friday, the 24th of May, two men walked with their legs poking out through a boat strapped to their shoulders along the sidewalk to number 31B of Grønlandsleiret in Oslo. The boat was a red canoe with a chimney torching from the middle section. Upon arrival, the canoe was put on trestles, the men climbed out and a fire was lit in the canoe’s oven. While the smoke rose, the teapot already on the stove, a temporary baking table was assembled next to the canoe and someone started to roll the dough flat. Another participant switched from one language to another, as she invited the gathered people of multicultural Grønland to share their stories on flatbread and astronomy through a microphone that was, for the occasion, dressed up in a heel of a bread loaf. The dough, rolled in a round, flat shape, was set to bake on the griddle of the canoe oven. A few moments later the warm fresh flatbread was buttered, cut in sections and offered to by-passers. Together, the smoke, the melted butter and the warm bread fused into a familiar and welcoming atmosphere, while the sight of a four-legged canoe and the old fashioned baking devices were uncommon enough to slow down traffic and spark questions. 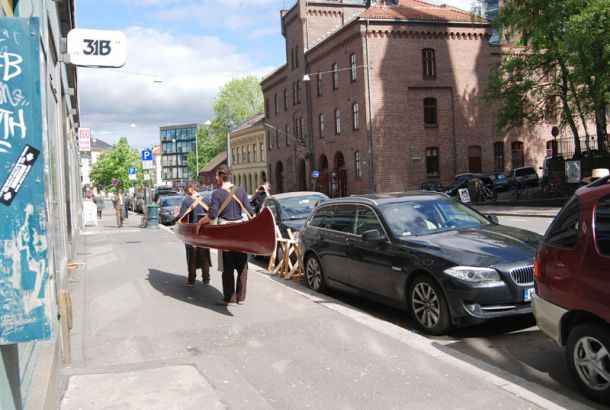 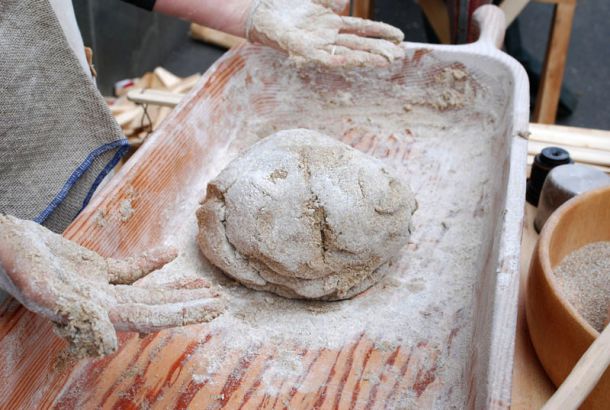 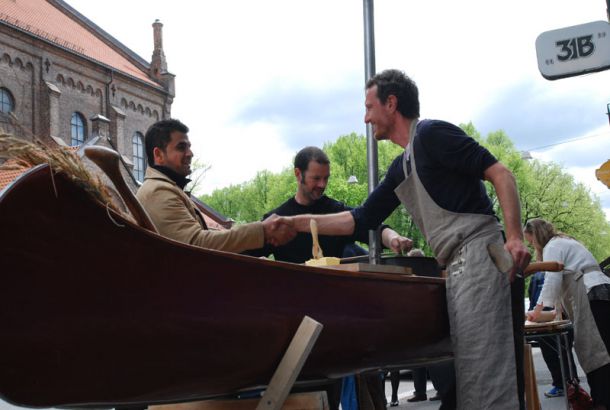 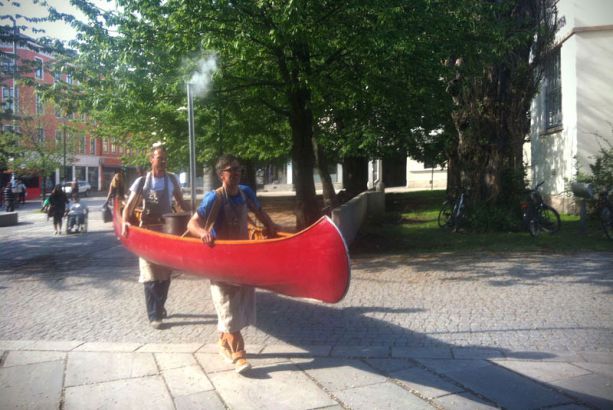 The note above is based on my observations on 24 May 2013 when Flatbread Society’s core members took the four-legged canoe on its first trip. In the middle of the canoe, there was an oven with a built-in griddle. It performed as a portable baking station under the name of the Mobile Bread Oven. Its first stop was on the sidewalk of 31B, a psychiatric day-care/café in Grønland. Here, by-passers were offered newly baked flatbread and invited to roll out flatbreads themselves. Conversations around the topic of flatbread were initiated and streamed live on Radio Ramona. The canoe’s phantasmagorical design resonates with traditional Norwegian folktales; it can both walk on land and float in water. Hence, it can be said to mirror Flatbread Society’s approach to site. The temporary Bakehouse was based by the fjord, but this satellite oven was on the move around the city. Consequently, the site-specific approach of Flatbread Society was not limited to the physical site by the waterfront. Crucial to the public space program of Loallmenningen is the connectivity with Grønland and the East side, supposedly achieved through sight lines. By visiting different locations in Oslo, the Mobile Bread Oven performs this sought-after connectivity in a way that profoundly opposes the panoptical practice of inscribing sight lines into the urban fabric. However, the mobile oven is more than a symbol or a performative gesture. It is a device in Flatbread Society’s research methodology and a way to assemble knowledge about the city. The Mobile Bread Oven created a social space that allowed the public to be involved, facilitating a research approach to the city that was concerned with the social dimension of public space.

In Grønland, standing outside of the psychiatric day-care café 31B, the relational potential of the baking situation was still unknown to me. What I learned, standing around the four-legged canoe with both pedestrians and visitors of 31B, was how many vivid stories and memories connected to flatbread are carried invisibly around in Oslo. Flatbread proved to be a subject that easily enabled conversations. Baking, maybe unlike contemporary art, is a practice that many people relate to. Flatbread Society activates double ontological positions and stages objects and practices further than what a more “pragmatic” approach to baking would imply. 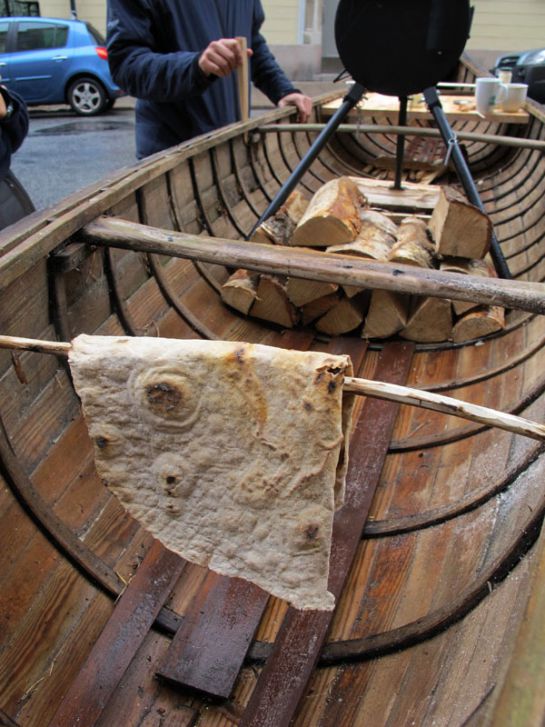 I am told baking stories from Iraq and Turkey. An adult man’s remembrance of his childhood’s anticipation of boreks, always baked at the end of baking day in a village in Turkey. Recipes and descriptions of ovens, something paired with a lot of nuts and oil. I realize that the flatbread, called so in Norwegian, is not a Norwegian phenomenon. A North African tells me in French about a grandmother and a grain field, and a Norwegian recalls how his mother once a year baked bread on a one-meter large griddle. At the very end of the event, a woman bakes flatbread. She tells us that her mother as a child, helped with the flatbread baking. The woman herself has a great baking method; she rolls the bread on a stick and moves it to the griddle. Someone asks: “Did you also help to bake flatbread?” “No,” she answers, “I only heard the stories.” The method she says has been learned by watching television.

Objects can belong to different realms of competence, and, by displacing them from their designated place, some of the unsettling potential of art described by Rancière is acted out. In the song “La complainte du progrès,” Boris Vian mocks modern couples’ accumulation of objects designed for all possible specialized functions, exemplified by the “tourniquet pour faire vinaigrette,” a specialized device to mix salad dressing. The object in question has only one specific purpose. The opposite is the case in the hybrid objects produced for the Flatbread Society—for instance the Mobile Bread Oven, the four-legged canoe running as smoothly on land as on water. The introduction of fully functional absurd objects of multiple uses challenges the logic of the specialized object. Another example is the “Flatbread Society Rolling Pin Telescope,” a rolling pin where one of the handles is detachable and hides a lens. The object is materially bringing together an instrument of astronomy and an instrument of baking, and thus the two practices are symbolically fused. Objects and people are connected through competence. The astronomer-baker is a figure that arises from this constellation, and it resonates with the imaginative projection of moons and planets on the surface of the baked flatbread. Although appearing in the urban landscape as an absurd construct at the same level as the four-legged canoe, their origins differ. 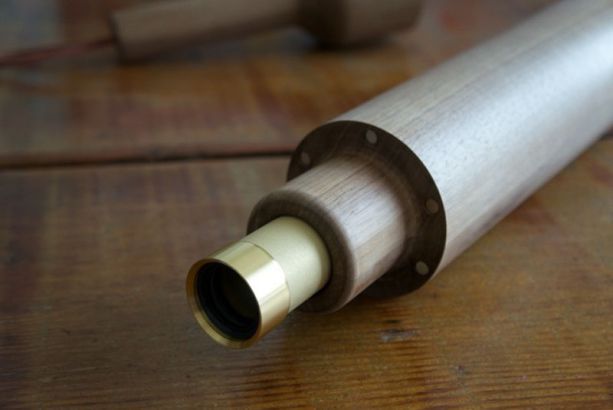 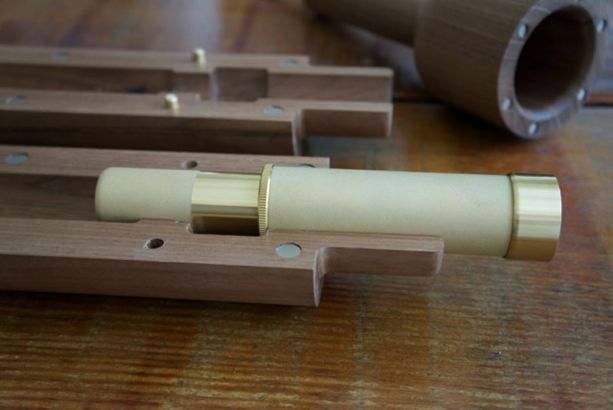 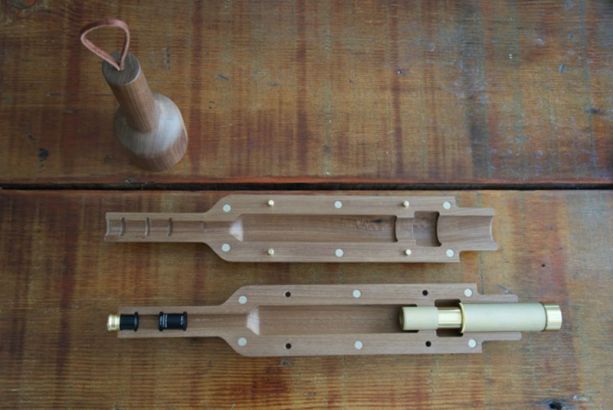 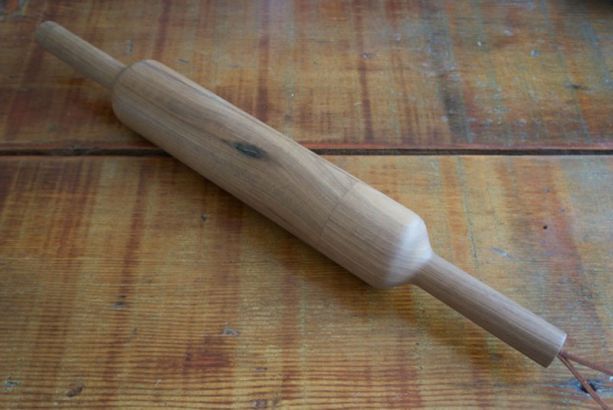 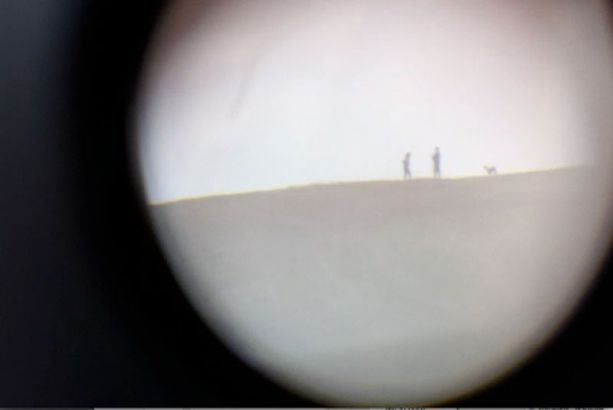 The Flatbread Society traces the astronomer-baker to ancient Mesopotamia, the oldest practice of collective astronomic observation (Daston and Lunbeck, 2011). At night, the guarding posts of the grain storages were also used for star observation, thus the grain was the source of knowledge of both the heavens and the soil. The astronomer-baker inhabits a double position, and to claim double positions, for instance that of baker and astronomer, is a political act according to Jaques Rancière’s theory on the distribution of the sensible. The tight societal distribution of time, place and occupation are by Rancière argued to be configurations of the sensible that keep each in their own place (Rancière 2000). In light of this, emancipatory acts contribute to blur the boundaries that keep individuals in their designated place (Rancière 2008). A double position that Rancière explores, one, which resonates with the baker-astronomer, is the worker-philosopher. In the 19th century, workers could access double positions by spending the nights reading and writing instead of conforming to the designated time and practices of leisure. Thus, they unsettled the configuration of the sensible and accessed progressive ideas and an imaginative free space during the time designated for rest (Rancière 2008, 25-26).

Cracks in the System

Five days after the Flatbread Society had visited 31B in Grønland, the canoe embarked on its maiden voyage. This time the two men walked into the water, their legs in watertight wellingtons attached to the bottom of the canoe, and once in deep water they paddled away in the direction of the Opera. Approaching the marble roof of the Opera, the canoe was met by security guards because of the prohibition to dock there. The artists simply walked out of the water, and in front of the security guards stood two men wearing something similar to a canoe shaped tutu, but no boat. 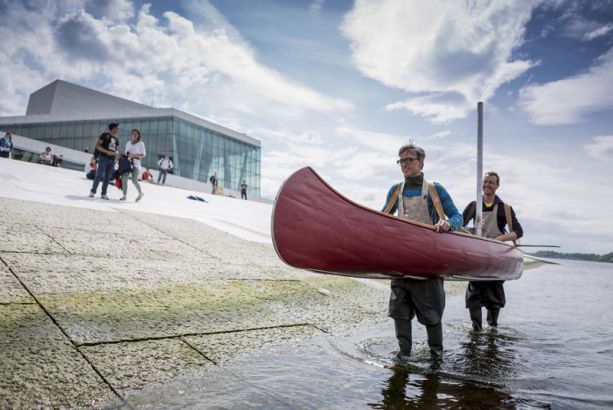 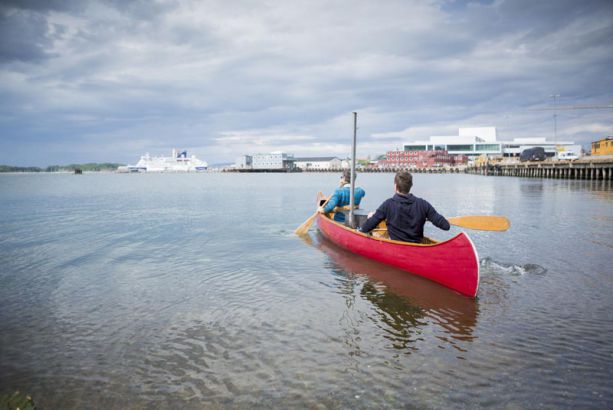 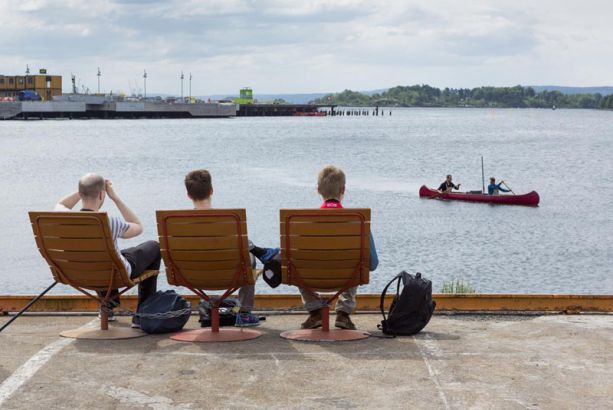 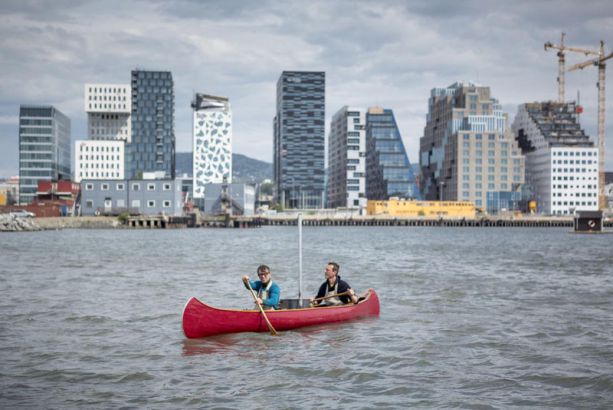 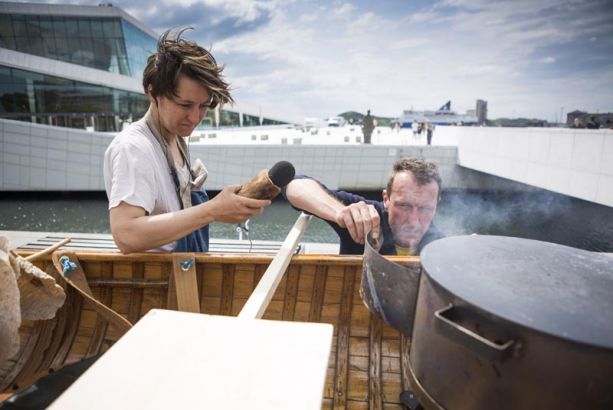 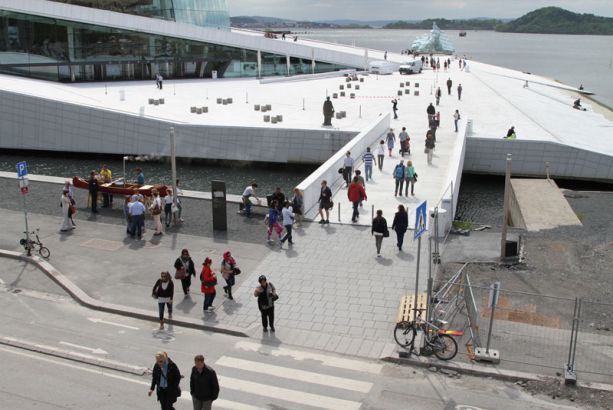 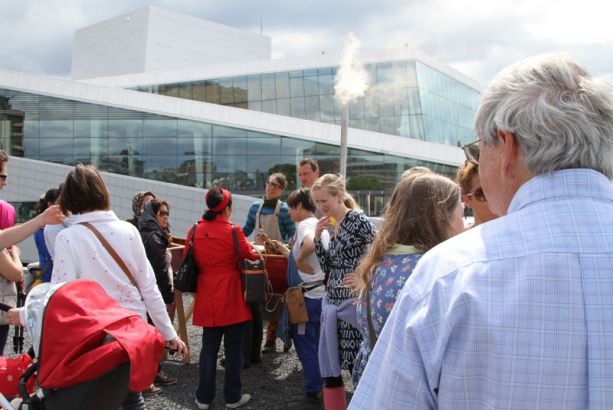 Flatbread Society’s work can be described as searching for different entry points in order to find and produce cracks in the thoroughly regulated area of Bjørvika. The artists propose the moment on the Opera roof, when the boat suddenly conformed to regulations by walking, as an illustration of a crack opened by using absurdity as a tool. In the absurd makeover of the boat lies an aesthetic suspension of the concepts fixed by reason.

The above text was adapted from the original text entitled 'Flatbread Society and the Discourse on the Soil' by Charlotte Blanche Myrvold.