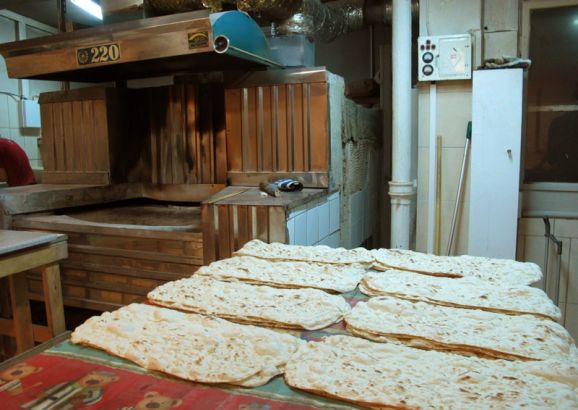 Twice a day, six days a week, a small group of men converge at the Zagros Bakery to perform the baker's dance. Dough is formed, kneaded, risen and prodded before being coaxed from a pillow onto a circular stone slab rotating through a cherry-red oven. After the bread travels just shy of one revolution, a thin, rectangular sheet of naan (or lavash) emerges, to be stacked with its cousins in neat piles before being bagged in plastic for customers.

One baker recalls watching his mother making the lavash as a youth in Kurdistan, and then offers us a taste of sheermal, a sweet bread flavored with a saffron-like flour and baked in a traditional tandoor oven. Unlike the naan, of which the bakers churn out between 7000 and 8000 daily, the sheermal is a special treat and is only made once a week. In contrast, the lavash production uses about 1 ton of white flour daily - all of which is procured from the local Kiwi market, Norway's Safeway analog.

And it's not just the Kurds or Arabs that come to Zagros to buy bread: in recent years, more and more Norwegians are stopping by.

Open six days a week (except Friday). Bakers come in 8am, 8pm daily.