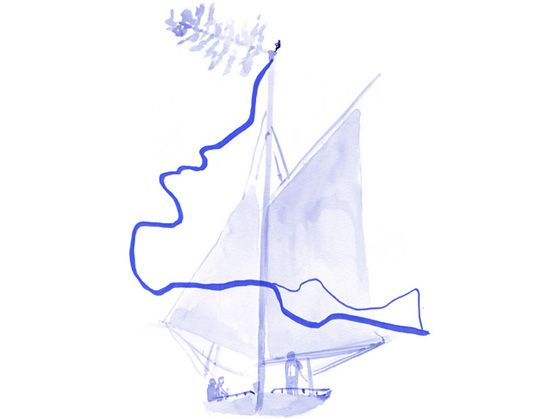 I am trying to imagine a fantastic voyage from Norway to the Middle East in a beamy wooden sailing boat built for arctic voyaging carrying nothing but a small box of seeds. Surreal to a fault, this voyage is at once mythical, scientific, and political in intention and implication. But above all a leap of the imagination.

The little box within this boat contains a few handfuls of most unusual grains — old stocks uncommon today, found in the cracks between planks in an old sauna in Norway and in a plant institute in St Petersburg, Russia. The boat is their container as much as is the little box such that their preciousness, made manifest by this wild disproportion in size, grants them an almost fetish character, like the Kula Ring valuables of the Trobriand Islands in the southwest Pacific that pass from hand to hand as gifts from island to island, loaded with magic spells.

The contrasts involved in this voyage from Norway are global in their emotional, historic, and geographical reckoning.

Wheat is said to derive from the Middle East, possibly from eastern Turkey, land of the Kurds (now embarked on a feminist and democratic-federalist future), so we can speak of this voyage as return or a re-tracing of a very ancient route combining human and non-human initiative by which wheat was domesticated from the wild and then slowly made its way through gifts, trade, winds, and sea currents, from the highly cultured Middle East to the barbarians of the north. 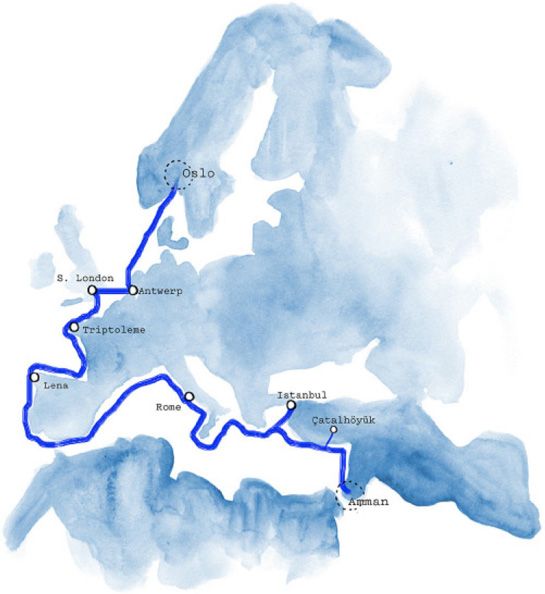 The voyage from Norway to the Mediterranean is like reverse engineering in an effort to make us aware of the enormity of history and ingenuity in our food supplies.

Seeds like these, declared illegal by European law and US corporations, come loaded with an underground history at once social and biological.

The domestication of plants involved a long march through trial and error — not to mention chance — wherein certain “weeds” of the wilderness became foodstuff and, alongside that, the scratch plow drawn by oxen used in Egypt, Rome, and the Middle East, gave way to the curving plow twisting the heavy soils of northern Europe.

All this is encapsulated in our beamy boat with its small box sailing “home” with stories to tell, as is the wont of the traveler.

The stories intersect as the boat sails into the zone where seeds belong to nobody but to history and to its Eternal Return as the boat drifts like the Ship of Fools into the ancient Mediterranean where it is hoped a more hopeful history is being made because of this very return.

One famous story is the new social configuration set into motion by the conversion of the wilderness into open field farming that cut down the forests. According to Engels this correlates with the development of patriarchy, private property, and the state, an end result of which is today’s agri-business.

The voyage of this ship of fools therefore raises the question: Can this reverse experiment initiate a new historical trajectory that is bound neither to patriarchy nor the state?

The other story is the taken for granted story of eating — eating flatbread, for instance, a bread that serves as food, plate, knife, and fork.

Each mouthful can itself be thought of as initiating a voyage like that of the tubby boat with its fluttering flags and rippling sails carrying its little box of wheat seeds.

For are not each of us this very same boat?

Are not each of us carrying the history of the voyages of grains in our bodies? Are not each of us performing when eating the interaction of planet earth with the human marauder each time we ever so unthinkingly munch away, bringing outsides into insides, the fields and rain and efflorescence of seed into the dark inner world where history — measured in aeons — combusts?

The return of the ancient seeds is like reverse engineering, taking apart fold by fold this long history and dense interaction. It is an allegory, this voyage, one forever open to chance, it being our participation from afar that breathes wind into the sails of the future.

Michael Taussig is an anthropologist known for his provocative ethnographic studies and unconventional style as an academic. He was born in Australia in 1940 where he studied medicine at the University of Sydney. He earned a Ph.D. in anthropology at the London School of Economics. He is currently a professor of anthropology both at Columbia University in New York and at the European Graduate School (EGS) in Switzerland. In spite of numerous publications in his field, especially in medical anthropology, Taussig is most acclaimed for commentaries on Karl Marx and Walter Benjamin, particularly in relation to the idea of commodity fetishism.